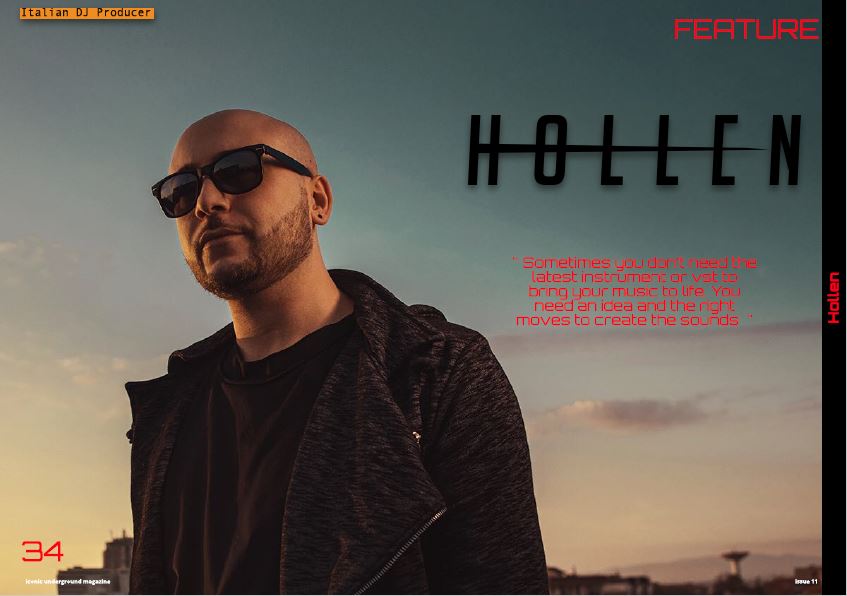 The Italian Techno scene is fully radiant and very well represented with Napoli based ‘Hollen’ who has been a superior powerhouse of fluent activity for many years. It’s very hard to ignore his past, which includes many purposeful highlights, but one that really took the scene by storm in 2013 with is flagship track titled “Collision” release in 2013.

“Collision” really covered a lot of ground with a cross section of supporters and was heard vastly in clubs around the world. The DJs that support his releases included the likes of the likes of Carl Cox, John Digweed, Sasha, Dubfire, Joseph Capriati, James Zabiela and personally I played it to death myself. One of the qualities, Hollen has an artist is a quite rare ability to create something unique that really touches quite a broad crowd. Ok, it’s a sound that’s maybe branded as Techno but if you listen carefully it comprises of much more than that.

It’s often a very polished production sound with a warm edge but still enough weight and drive to create an exciting floor dominating atmosphere. He’s very much a DJ favourite with this trademark signature sound, and the song “Last Night A DJ Saved My Life, I’m pretty sure Hollen as saved many DJs lives and sets. His impressive release accolades has covered a lot of ground with impressive outputs a lot of the cooler underground imprint, this includes such as “Suara, Kling Klong, Terminal M, Deeperfect, Glasgow Underground, Saved, Agile Recordings, the very supportive Bitten in Holland, Loose Records, Unrilis (Italy) and his own Prospect Records”.

Personally from DJ perspective its often hard to get inspired by other DJs sets, however with Hollen I’m always entertained and engaged by what I hear. This is also a sentiment that is shared by clubs such as “ Ministry of Sound, Egg (London), Dream Festival (Mexico), Bahrein (Argentina), Club Vertigo (Costa Rica), Clash Club (Brazil), International Talent, Rashomon (Italy), dates in Dubai, Holland, South Africa, India, Japan, U.S.A who have all featured “Hollen” as DJ.

Lee Softley: Welcome “Hollen” to Iconic Underground and thanks for the interview.

First of all, let’s talk about your label “Prospect Records”, it’s been around for some time now but recently it seems to jump into hyperdrive. What is the motivation for the recent influx and can you tell our readers more about the label and what can expect in the coming years?

Hollen: Prospect Records started many years ago as a partnership between Tony Dee and me. The sound was more on the tech house side and we have been supported by many international DJs. We never worked too much on the label since we were both focused on releasing music on other labels. In the last few years, I took care of it with a proper team made up of my manager Francesco and one of my older friends Luigi. We decided to bring the label to a new dimension with a unique style and a monthly program. The artists around the label are all new talents, mainly Italians, with a strong attitude to techno sounds. The label is growing but I like to say that the best is yet to come. So keep an eye, or much better an ear, on it.

LS: Sticking with labels, there are so many changes on the horizon at the moment with streaming becoming so popular and talk of new technologies such as Blockchain etc. How do you see the digital platform changing for labels/artists in the future?

H: Well, the digital platform has some good and bad points. One of the main reasons is that now you can spread easily your music and in many different ways. It’s a fast circuit with instant feedback, fewer costs with respect to the past and your own fan base can grow really quick with the right moves. On the other hand, this is going to be ‘too much’ and sometimes the quality of the music is not as it should be. I see that the digital market is going to kill the small labels since the big part of the attention is going on who did the track instead of the sound proposed. Also, I see that many mid profile labels are not investing the necessary money on the advertising, trying just to use the name of the DJ to sell some more copies. I think that in the next few years, we will see other important changes that will route the music market into subscriptions dedicated to the DJs. It would be not a surprise to find Spotify, iTunes etc.. Plugged already into CDJs connected to the internet.

LS: Moving over to your music production, what makes you tick in the studio and gives you that drive and motivation to be so consistent?

H: I always tried to create my own sound whatever it is, tech house or techno. Sometimes it’s not easy to find a new idea but if you live surrounded by the music, it will be easier. Everything around you is a potential idea, from a noise you recorded in the street to an old song heard through the radio. I’m not really into the big studio or collecting synths. I have my own setup that I improve step by step. What I learnt in my career so far is that it’s more important to know well your setup than waste time to read, understand and learning big manuals. So, the first step is to have the right mood and the second step is to turn this mood into music.

LS: You have already remixed many tracks and been part of great collaborations, however, if there were one artist or maybe a few you could collaborate with, (either electronic or none electronic) who would it be and why?

H: There are a lot of artists I would love to collaborate with. Excluding the DJs, my favourites of all the times are Depeche Mode, Daft Punk, Chemical Brothers, Prodigy, and Underworld… Just to name a few. Why? Simply because I love what they did. I grew up with their music and for me would be such an honor simply having my name on the same line. Lol

LS: Obviously, you are considered a Techno artist but what are your influences outside of that? And do you try incorporating these influences into your music?

H: In the past, I used to be a house DJ but as time passed my taste moved on the techno sounds. At the moment I consider myself a global DJ since I play different genres during my sets. I like the music in all its way, from the rock to the pop, going through indie music, chill out, metal etc.. This is going to reflect also my productions side since there are many influences in it.

LS: Your DJing has also progressed heaps over the last few years, what do you aim to achieve with your DJing? What’s your preferred equipment set and can you also share any highlight of great gigs from over the recent years?

H: My aim is to share my personal view of the music. I learnt over the years that every crowd wants to have fun and your (my) job is to let them dance from the first to the last record. I started with the vinyl, then CDJs and last but not least my actual setup with Traktor (4 decks) and controllers. I feel more comfortable with it and I can switch to some live actions impossible with other setups. I have had some great shows in my career, I played at Florida 135, el Row, Fabrik, Space Miami, Dockyard Festival, Mystic Garden Festival and more… Especially the festivals are unbelievable, you stay in front of thousands of people there for your music. You feel their energy that works as adrenalin inside you.

LS: I read a post of yours or rather a comment you added to a post talking about choice studio plugins/hardware etc. Your reaction was in the flavour of “You don’t need the best studios/equipment to get the best results”. Do you think producers sometimes over complicate technology and techniques when simply you just need to focus on great music?

H: I believe that whatever helps you to transform ideas into music is great. As I said, I’m not into big studios or synth collectors.

Sometimes you don’t need the latest instrument or vst to bring your music to life. You need an idea and the right moves to create the sounds.

I see that some of our older colleagues did music with Atari, samplers, keyboards, external effects etc… We should feel lucky that we can arrive at the same or higher level just with a Pc or a Mac.

An old fool said it’s not the gear but the ear.

LS: Your home nation of Italy has always been associated with style and art, do you think this has an influence on the music coming out of Italy now and is there anything going on there that you would like to share with us?

H: Italy is a very nice country, also if sometimes our politicians try their best to kill it. Besides style and art, Italians are famous for other stuff like food, love, music, sports (naming only the good ones). There are many nice names coming out from Italy at the moment and Italy has always been part of the scene since the beginning even if we never had a club culture like the UK or Germany.

LS: On a personal level, what does – Hollen do outside of music? Any personal interests, hobbies, sports or other activities you can share with us?

H: I’m an easy guy, I love what lets me feel good. I spend time with my girlfriend, with a lot of friends, I love to cook and eat, playing video games and watch tons of series and movies.

LS: Closing question, can you please share with us any of forthcoming release plans, activities, gigs or anything else you would like to mention that we haven’t covered?

H:  I have some upcoming releases as Off Recordings, Filth on Acid, Silver M, and a new collaboration with Raffaele Rizzi and remixed by the Belgian duo the Filterheadz on Prospect Records and I’ve one more solo EP on Prospect with the remix of Zakari & Blange. About the shows, I’m very happy that I will finally play again in Napoli for International Talent at Old River Park, then Asia and South America tours.