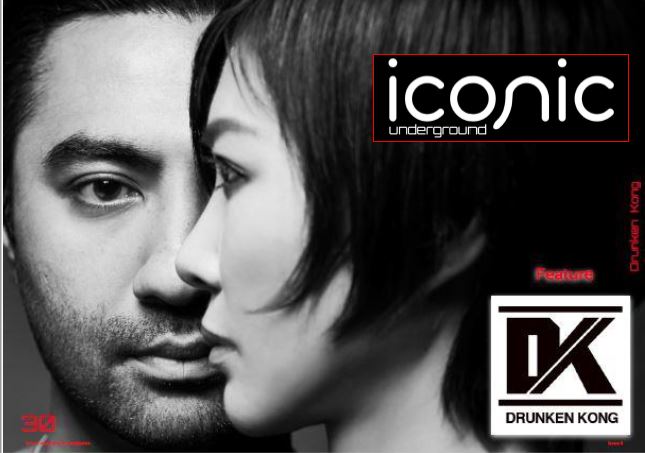 Drunken Kong are one of the biggest products that techno has to offer and every one of their releases set the benchmark on what it takes to be a heavyweight in the division.  Between production and touring this duo has every element needed to be a success in the industry which has come to fruition over the last couple of years.  Alan Lumley (DaGeneral) took some time out to have a chat with them and learn a bit more about what makes them tick.

Alan Lumley: Drunken Kong are one of my favourite artists at the moment but for the benefit of the readers tell us more about Drunken Kong the origins behind the duo and what musical influences made you who you are today?

Drunken Kong: Drunken Kong is a project between myself (D.Singh) and my partner DJ Kyoko.  We first started to work together in 2010.  We both had different backgrounds in music.  I was more into producing and engineering whereas Kyoko was more of the DJ and promoter. We started out as hobby DJ’s and soon started to play venues in Tokyo, which lead us to our residency at Womb. We initially called ourselves D&K, which were the initials of our first names, but we soon decided to change it as we felt it needed to be a little different, so Drunken Kong was born. We have always been so interested in movie soundtracks, they are so multi-dimensional and perfectly tell a moment or emotion, so we take a lot of inspiration from them, and did so for this album.

AL: Your music production is off the scale, and every production is just wow.  How would you describe your sound, and what motivates you in the studio?

DK: Thank you so much! It has been a labor of love, but we are so passionate about music production that it makes us so happy to hear people are enjoying the album. We would describe our sound as somewhere between techno and tech-house. We always try to focus on the groove element in a track and then develop it from there. Making tracks different can be hard these days with so many amazing artists out there, so that’s a challenge and one we like to accept. Keeping our own unique style is important to us, and being as original as possible.

AL: I have had the pleasure of listening to a lot of your releases on Tronic, including the massive album you have coming.  The journey through music is awesome.  Can you break down your thoughts on the tracks on the album, and how exciting it is having so many releases on Christian Smith’s label?

DK: Firstly, we are so happy to be able to release this album on Tronic. It is a label we have been fans of for a long time, and we have so much respect for Christian and all that he does with Tronic. We have a lot of tracks on this album which we are so proud of. It’s been a working progress over a long period of time, to ensure we are happy with each and every track. We never started with a specific theme or concept, and not all of the tracks are dancefloor orientated. This is something we felt was important, as they all have their own meaning.

We let the creative side just take over here, and didn’t want to have any limits when in the studio. The music took us on a journey for this album!

AL: In the last few years you have catapulted to being household techno names across the world with some successful tours and events thrown into the quality of the production.  What exciting times over this period have stood out the most, and how does the European market differentiate from the scene in Japan?

DK: We love Japan and the scene there, and always enjoy playing at home. We are happy the scene there is growing substantially with so many amazing clubs bringing in more international talent than ever before. Ahead of the album, we have had a lot more European gigs, which have been amazing, to say the least. We played at Barraca in Valencia which was wild, as well as the infamous Sisyphos in Berlin and last week our standout set at the Tronic Showcase in Barcelona, for OFF Week. It’s really cool to play for a totally new crowd, the Europeans love that harder techno sound, and can dance all night long it seems! They have a ton of energy and are definitely more open-minded and knowledgeable when it comes to underground electronic music. Also, we tend to do longer sets in Europe, so this something different from when we play in Japan.

AL: What key elements of equipment are really doing it for you just now in the studio.  Is there something that you just have to use each time you are working on new sounds at the moment?

We have a lot in the studio back in Tokyo. It’s a mixture of new and vintage items. There are much amazing hardware’s but personally, we love the Juno-106 and our Moog Sub37. We use both of these a lot in our tracks along with the King Korg Synthesizer, it makes our low-end sound and it’s such an easy piece of equipment to use.

AL: What would your advice be to up and coming artists and producers trying to break into such a sought–after scene. What tips would you give them?

DK: Never ever give up. I am sure that you are told this by many artists that you interview, who now have successful releases, but it goes a long way. There are so many tough times you will go through trying to make a name for yourself in this industry, and rejection is very hard to deal with at times, but coming through the other side that little bit stronger and always learning from feedback is so important.

Believe in yourself and be ready for that moment to shine.

AL: What can we expect from you over the next 18 months on both a production and event front?

DK: Well as the album came out on the 19th June, that’s going to be our main focus for the year with regards to releases. It’s been a big project for us, so we will be touring a lot for the remainder of the summer as part of the album tour through to ADE, and then we will head back to Tokyo no doubt for a few gigs in-between, alongside with some studio time. We do have an exciting collaboration project out later this year, but we are unable to announce it just yet!