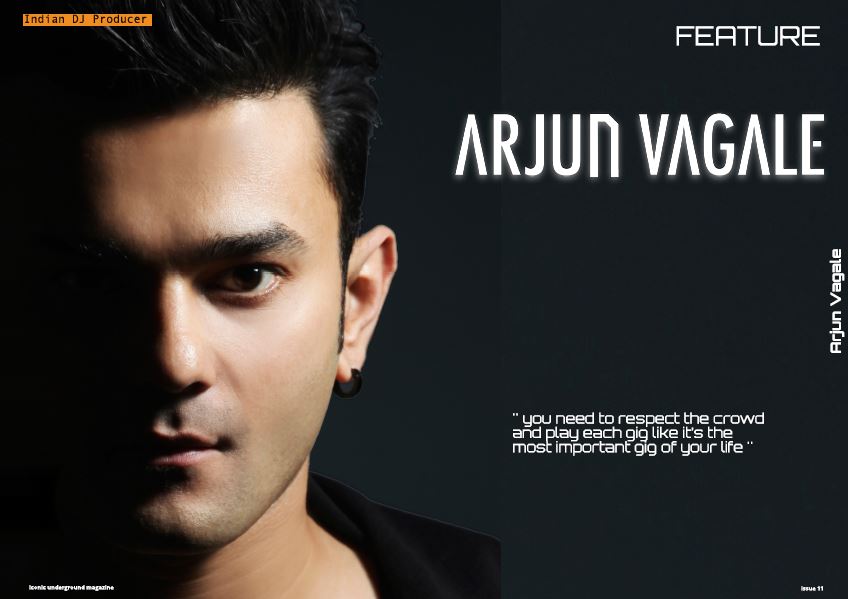 Arjun Vagale – is quite a unique breed and one who should be deemed as an inspiration to up and coming artist/producers. He has made a career from what were quite humble beginnings with limited resources to something of a power-driven potency at a high level. I believe part of his continued success is his relentless dedication, focus, always willing to work hard and push the boundaries.

Being super active he always seems to have something new on the go and different ventures of interest that are inspiring. It’s almost like he’s made a few clones of himself, all working in sync consistently to provide a mass of energy, sound, and direction.

He’s quite known that he originates and resides in India and has become an integral part of the developing scene out there. He’s almost like India’s techno ambassador and developing a presence similar to what we saw in the UK in the 90’s.

Technology advances in music and creative recording methods are something of a passion of his and he’s very willing to go outside his comfort zone to try something new, diverse, surprising and entertaining. He also submerges himself in music industry conferences, agencies, runs a label, music schools as well as working on his own music productions and DJing.

In the DJ arena is one of the most active out there with super energetic performances that have hit major festivals and clubs such as “BPM” in Mexico, WOMB in Tokyo, Satellite Beachside Festival Goa, Magdalena Berlin Germany, La Terrazza Barcelona, Heart in Miami, Blue Frog India and activity continues. We managed to catch up with Arjun to hear about all the latest in his ever-progressing world.

Lee Softley: Hi – Arjun and welcome to Iconic Underground
Arjun Vagale: Hello …Thanks for having me 🙂

LS: First of all, how do you feel things are progressing in India right now and the growing appeal of Techno in the country?

A: The scene in India is HOT right now. It’s maturing quickly, as clubbers are digging deeper and discovering new music. I’m really proud of how far we’ve come. It’s pretty amazing to see how open-minded the crowds are – I recently started playing a few open-to-close sets, and I decided to really push the boundaries and twist my sets with sounds they might have not heard before! They took what I threw at them and kept wanting more. A lot of people discount smaller countries or places that still have a developing scene, but India is on point right now. Even artists like Drumcell or Dax J were totally amazed how “up for it” the crowds in India are. There’s also a MASSIVE influx of international DJs, both big and small, every weekend, so it’s really keeping the scene fresh.

LS: Who do you consider to be the next generation of electronic Indian artists / DJs or the ones to watch out for?

A: There’s some serious talent in India waiting to explode – not just in techno, but electronic music in general. Guys like Sequal, Praveen Achary, dotdat, FILM – all great DJs & producers who are creating their own space in the scene. Indian artists are actually miles ahead as far as track selection and technical ability is concerned … they do the research and really dig, both in the studio & the DJ booth, so the level of quality is high! The only issue is reach – it’s now extremely tough for an Indian artist to break out, just coz of the amount of competition and zero ability to physically network… I see more and more, artists/labels/promoters want to get away from digital communication, and want to physically meet and make a REAL connect. It would take someone from India almost triple the time and effort as it would for someone living in Europe!

LS: Techno as a genre seems to be changing quite a lot at the moment, in some cases, it’s becoming more stripped back to Detroit -esque and in other areas moving to more energetic tempos and rave type influences.  – What your take on this and is it influencing your own productions?

A: I think that’s the beauty of ‘REAL’ techno – it’s always evolving. Personally, the older I get, the harder I’m going 🙂 It’s strange coz it’s mostly the other way, but I’m enjoying playing and producing the rougher / tougher sound so much right now … sometimes people tell me it’s too hard at times, but I just love it. In a way, it’s trying to push the boundaries and not stay in the ‘safe’ zone – playing what people expect. I mean, if I step out for a night of clubbing, I want to hear something I haven’t heard before, not the same stuff every other DJ around town is playing.

And yes, it’s also helping me push boundaries in the studio. Rather than following a formula, I try and do something unique in each of my productions … I never save presets, I rarely even use the same drum sample more than once. And now I’m producing 80% on hardware – for me, it’s all about different ways to process the synths or drum machines. It’s fun, interesting, and most importantly not boring … I think that’s what keeps it fresh and challenging.

LS: You have featured on lots of great labels, however your work on – Drumcode – seemed to be quite a special moment for you, and can you tell us what made it so charming for you?

A: Drumcode is the biggest techno label on the planet, and as much as I like to be underground, it is important to get on the biggest platform and showcase my sound – especially since I’m from India, as a lot of people still don’t take non-EU artists seriously. Adam has been very supportive of my music and I’m really grateful, I know that it’s opened a lot more doors for me. I always wanted to sign with Drumcode, but I was never desperate for it. I wanted to release something I could be proud of, and with “Liquid” I think I did just that.

LS: The label you run – Odd Recordings – with label Ramiro Lopez has come on leaps and bounds in a short space of time, Can you tell us more about the label plans, sound direction, artists and what you set out to achieve?

A: I can’t tell you how happy we are with the label’s direction. Last year we put a lot of energy and effort into the label, selecting exactly the right tracks, and establishing the sound we wanted. It really is a labour of love and we are both super passionate about it.

So far, 2018 is looking great – apart from Ramiro & myself, we’ve got some super artists onboard – guys like WEX 10, Balthazar & Jackrock and even 2000 and One. Our next release has remixes from Coyu & Petter B, and feedback has been great so far. Our idea is and will always remain – quality over quantity. We release less, but each release really speaks for itself. It might not be for everyone some time, but we believe in it.

We also pressed our first vinyl called ODDWAX, and our plan is to do more this year, so

I don’t want ODD to be just another digital label putting out music for the sake of it. There’s way too much rubbish out there, so we are hardcore about what we sign.

LS: The music industry is consistently evolving at the moment with lots of change, is this something that you are interested in or looking at with such as Blockchain and other developments?

A: Honestly I haven’t even looked into that yet 🙂

LS: I recently saw you doing a question and answers session via Beatport, interestingly you were talking about being respectful as a DJ. Do you believe that the 90’s attitude of almost being smashed on the decks is now frowned upon?

A: I think in this social media era, everything is put online, so you have to be careful how you behave. But more importantly, I feel people have paid money to come and hear you, so

you need to respect the crowd and play each gig like it’s the most important gig of your life.

You have to give them a good time, or they won’t come back. And clubbers are spoilt for choice these days, so if you act like a douche behind the decks, you may lose your audience. The 90s attitude is certainly not cool anymore! I don’t think the young generation has the patience for it.

LS: You’re always changing and developing the way you record music, what the latest in the area?

A: I’m diving deeper into the modular world. It’s really addictive, and I’m glad we don’t have any stores in India yet, otherwise, I’d be broke. But it’s something that I’m excited about – the possibilities with even a limited system are endless … and even now, with older modules, I’m discovering new ways of using them.

Again, the beauty is no presets, so you create every sound you patch,

and in a way, it’s totally YOUR sound, and original – even if it’s just a simple VCO going to a filter – you patched it!! I like that way of thinking. In this preset / sample pack-driven production world, it’s a great way to stand out and just do your thing. I recently moved home to Goa, and I’ve set up a new studio – it’s the first time I’ve had it professionally done, so it’s really exciting to come home after the weekend and get down to it.

LS: We all love your outspoken comments and controversial topics you raise, Is there anything you would like to talk about here?

A: Haha thank you. Recently I’ve been thinking a lot about racial equality in Dance music. We need to see more coloured people with talent from all around the world on bigger stages, supported by the industry.

LS: Thanks once again – Can we finish up by asking you to share any new releases plans, up and coming gigs, remixes or other ventures?

A: I had a really busy release schedule last year, so I’ve decided to keep it a bit quiet for the first quarter. I do have a release on ODD in May, and I’m also in the process of finalizing an EP with a big classic techno label, which I’m really excited about. I’m remixing a track from Pleasurekraft’s new album, which should be out later this year as well.

On the gig front, we just announced our ODD recordings party ‘ODDyssey’ at Off Sonar this year! Last year we sold out on a Monday, so I’m expecting this year’s party to be a riot! And of course, I’m super pumped to be playing for Drumcode Festival & Nature One Festival in August. Apart from that, we have plans for Japan, China & Australia later in the year, all in the works.

Once again, thanks for having me, always a pleasure talking to you 🙂