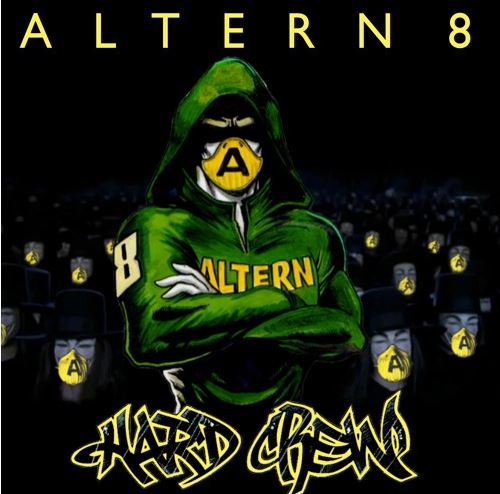 ALTERN 8 CELEBR8 THE 30TH ANNIVERSARY WITH A NEW RELEASE!

“Fast forward to the 30th Anniversary of Altern 8 (what a great year to pick eh?) and I’ve decided to release a NEW ALTERN 8 TRACK!” were some of the first words by Mark Archer on his social pages some weeks ago. Obviously, this statement went down a storm and started spreading all around.

In the summer of 1993 Altern 8 released their last official single entitled ‘Everybody’. This release reached No.58 in the UK Charts with their highest chart postion with “Activ 8 (Come with Me)” reaching number 3 and now, 27 years later the A-8 fans are about to wear their masks and get an exciting and maybe imperative new release. New material from a new track.

This track is entitled ‘Hard Crew’ and it’s been played out at Bang Face some years ago receiving a massive response!

“We wrote a new track just for the live set that was Bang Face. We’ve been playing that outlive for the past couple of years, just testing the water with it, which is exactly the way we did tunes back then. This track goes down really well. It’s like right in the middle of the set. So when we finish it and release it and then who knows we might start work on a new album”

Mark told me on an interview we had last year, on behalf of his gig in Athens.

And now, out of the blue, like this pandemic has hit us, a new Altern 8 release sees the light of a release, just before leaving this crazy year.

This EP is comprised of four smashing versions of ‘Hard Crew’. Something fresh to your ears, bestowing the remix duties to some of the elite Nuskool producers of today.

Sheffield’s badboy trio and co-force behind Club Glow, Denham Audio, take over with their usual UK-Rave style, being on fire the last period with a recent sold-out amazing record on Sneaker Social Club. Then it’s also Leeds based producer, Samurai Breaks. Certainly one of the hottest names of the modern Jungle and Footwork/Juke styles that couldn’t be forgotten to be called and give his own twist among DJM. And the tracklist ends up with a ‘Reinst8 Mix’ and a remix by Mechanizm & Kin.

All in all, it’s the new sound of UK-Rave, the next level of Hardcore related music, either junglistic or breakbeat-ish; the revolutionary homage to Bang Face and its loyal hard crew that were lucky to live the last of the raves as it was called (..and who knows?)

This release comes out digitally on the Altern 8 official Bandcamp page on Friday 6th November. It’s a date when Bandcamp waive their fees as they’ve already announced, thus all proceeds go to the Artists and the Labels.

If it gets the right boost and support from the fans, it is likely to be released on Vinyl format very soon, as it is said. Worth to mention also that a percentage from the sales will go straight to the #WeAreViable to help them out with what’s needed around their campaign. #WeAreViable is a movement striving to keep alive the whole industry of Artists, Labels during this hard period. A period, which is fully masked and calls all masked crew around the globe to join forces again in order to celebr8 the Altern 8 30s. To all the authentic Hard Crew out there!